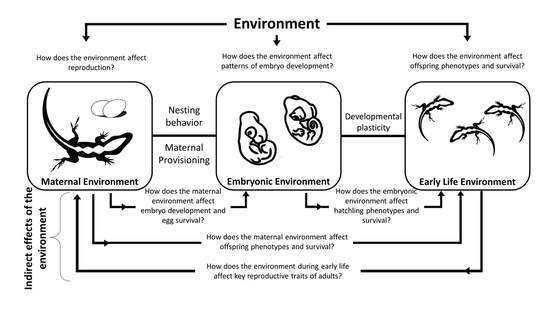 An overview of my research framework and the core questions it generates. I focus on the embryonic environment; however, the maternal environment is linked to the embryo environment via maternal care (e.g. nesting behavior) and provisioning (e.g. yolk caloric content). Moreover, via developmental plasticity, the embryo environment is linked to the success of neonates and ultimately adults. Environmental conditions can directly influence each life stage; however, they can also affect one stage through its effects on another (i.e. indirect effects).
I have always been fascinated by the roles of ‘nature vs nurture’ in development. For 400 years, philosophers have debated the relative importance of inborn and acquired traits (Locke’s ‘blank slate’ vs Descartes ‘innate ideas’). Genes are powerful agents that shape our bodies, govern our physiology, and direct our behavior; however, our genes interact with the environment at each stage of development. The goal of my research is to understand how the environment influences fitness-relevant phenotypes across multiple life stages. As a developmental ecologist, I focus on the embryonic stage; however, I incorporate studies of reproduction (i.e. adults) and early life (i.e. neonates) to understand the causes and effects of patterns of embryo development. Humans are rapidly changing the environment on a global scale and embryos are particularly sensitive to environmental disturbance; thus, it is an important time for us to understand the impact of the environment on development.

My research framework uses both field and lab methods and integrates physiology, morphology, behavior, performance, ecology, and evolution. Thus, it can accommodate a diversity of student interests, train students in an assortment of methods, and immerse them in a variety of theory. Moreover, it is of grander significance because it helps us understand an age-old question: how does the developmental environment shape our future?
Urban adaptation and invasion biology
The ecological and economic impacts of invasive species are a growing, cosmopolitan concern. Currently, urban land area is increasing at a rate potentially twice that of human population growth, which leads to the encroachment of plants and animals into urban areas. The Anthropogenically Induced Adaptation to Invade (AIAI) hypothesis predicts that populations of organisms adapted to urban areas may be primed to become successful invaders of similarly disturbed habitats elsewhere. This is because urban areas in different parts of the world likely impose similar challenges when compared to natural areas of the same regions. As part of a robust test of the AIAI hypothesis, my research provides novel insight into the fundamental causes of biological invasion by exploring the evolutionary consequences of novel environments on an oft neglected life-history period: embryonic development. My aim is to better understand how organisms adapt and acclimate to human-disturbed habitat and how such changes may influence rates of naturalization and invasion.